Mek Cronk wondered the halls of the ancient tomb, unaware of where he really was. It was dark, horribly so, but where the other boyz back at the entrance were to scared, Cronk could smell opportunity. There was metal here..lots and lots of metal in the air. The projeks he could complete once he got a hold of the metal raced through his simple mind. He came to a large chamber and walked in, stepping on something that shifted under his weight and the whole room buzzed to life as things began to illuminate in a soft green glow. The need to flee almost took hold but his eyes beheld something beautiful.

Before him was a room of alcoves full of tall metal men. Lifelessly hanging there, they looked like the hummies did when their meat was chewed from the bones, but instead of weak bone their limbs were pure metal. He drew close and marveled at the construction. The potentials raced through his head.  Some E'avy Armor here, some wires there, definitely some Kustom jobs done to the gun it carried. It would be a machine to rival all the other Mek's maybe even get the attention of the Warboss...maybe..even rival the Warboss.

He grinned and rubbed his meaty green hands together. "Yesss.." he hissed "I be making ya right and propa." His eyes then looked at the hummie skull like head, that would definitely have to go. 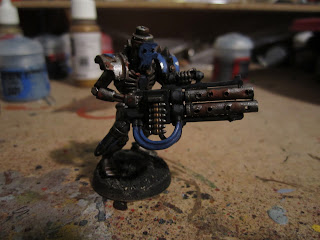