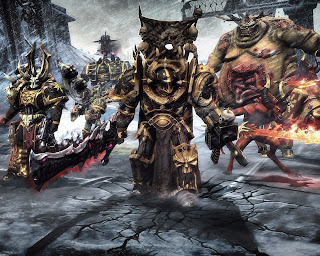 So the Chaos codex is soon to be out (aka tomorrow) and I have had a chance to get my hands on the leaked codex itself a couple days before release date (as most of us have).  After a good read through I can honestly say the one thing I like the most out of the book is that it doesn't feel over the top.. It's definitely not a GK'd up Chaos book. As I was telling my friends in a codex breakdown discussing, this feels like the next evolution of chaos post 3.5.  If you pretend real hard that we went from 3.5 to 6 its almost possible to forget that debauchery we called 4th edition Chaos. The fluff was pushed alittle further with the introduction of more renegade chapter descriptions, and though we did not get our "Legion specific" rules we still have some org chart swapping.

I do like the buffing normal Chaos Space Marines got. Between the gentle nerfing the cult troops got and the buffing marines got, it's no longer a skipped over option and go straight to the cult troops. As for the cultist, Yay I can pull out all those shirts vs. skins cultists from the days of old (pic).
The one thing I noticed that struck me odd however was that the new model items are not super over the top to drive sales. Yeh the dragon will be taken cause everyone is on a flyer binge, but the other units like the Mauler/forge fiend, Warp Talons, Mutilators seem sort of...meh? I mean GW used to put these new models in the dex and they were the new shiny's and everything was amazing and go go go buy new models. This dex to me favors the models we already have for codex potential.  Lets face it, there are alot of already purchased Chaos armies sitting in closets just waiting for some joy joy table time, so no huge jump in sales.
As for disappointments I was REALLY hoping my Thousand Sons would have gotten a it more love in the usefulness department. My brother (the SW player) was just giggling the whole time we reviewed the dex, muttering under his breath "they still suck" over and over again.  As an avid Chaos player since early 3rd ed I think the only injustice I see in the codex is the Legion fluff. They are so small in their legion descriptions and details it's almost insulting.  It's even more so worsened by the fact that some of the other renegade chapters desc. boxes are much larger..WTF!.........ohh sorry..my fluff bunny was showing.

All in all I am enjoying the book. The biggest thumbs up I can give it is that I read the whole thing front to back, as apposed to some of the other books were it was, Step 1. Open Book, Step 2. Skip to back and read army lists. As for my plans for the book, I am currently working out my first tournament list, with this book, in prep for 11th Company Tournament in Nov. Don't think I am going to be taking my Nurgle again (even though Epi just made a ton of new friends with this book) my current leanings is doing a Mark of Slannesh boots heavy list.
Posted by Tao 2 comments: