Found these Leaked photo's of Chaos Space Marine models on The Emperor's Codex website.  For the better part of four months now there have been teases and rumor mill on the Chaos Codex and new models and the Starter set. 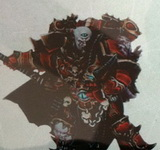 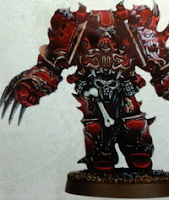 All of which was, at least for me, a roller coaster of excitement and disappointment four months long. Now finally we have solid pics from what looks like the up coming codex of new Chaos models.. 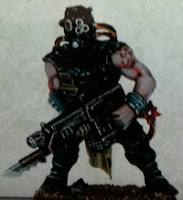 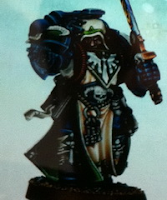 An though I have a soft spot for Dark Angels (always a sucker for a tortured soul character) my true love has always been Chaos.  An to finally see actual evidence not rumors, not speculation, true to form evidence of new Chaos models has my heart pumping and that feeling you get on a roller coaster as you hear CLACK, CLACK, CLACK as you go up another hill ready for an amazing ride. Must resist urge to get my hopes up......
Posted by Tao No comments: Sorry for the post delay, real world took a hold and started choking me.  So as many know there was an update to Chaos Daemons in this months White Dwarf, and like a good Chaos Cultist I picked it up day one and drooled over the new shiny.  The new Slannesh chariots are beautiful models that provide evocative reactions one would expect from a god of sensations, but what really drew me in was the new Tzeentch models.  I love Tzeentch, he is by far the most interesting and complex of the Chaos Gods to me and is only compounded by my draw towards the Thousand Sons plight (which is even more compounded by my real life brothers love for Space Wolves).  As such I was really drawn in by the new Flamers and Screamers models, picking up a box of Flamers cause I could (Ramble: and can I say well played GW, not only did you give us plastic but you made them a box set of 3 for only $20, I actually felt like it was a price worth it's value till I sat down and realized a full unit is still $60....Hhhhheyyy!  I see what you did there.  Well played good sirs...well played).  Anyways, I have already put the models together and hope to get some paint on them shortly.