So it's official.  Or at least as official as you can get after already paying for your ticket.  I got my Templecon pass in the mail last weekend (praying I don't loss it before I get there) and I submitted my 2K Necron list for the Onslaught tournament to the organizer.  Now I just need to finish painting up all these Crons in time to get into the IFL Bus heading north on Friday morning at 8am.  List is below:

So I decided I was going to give Nemesor Zahndrekh a go.  His ability grants push good shooting into great shooting.  And various abuses of Hit and Run and Furious Charge can make some of the more aggressive units in my lists much more potent.  Issue though, there is no model for him.

So I look at rumor mills for the supposed Feb 2012 Second wave and I don't see him in it.  Not even hinted at it.  So taking the next step I looked at various models on line and decided I would take the Stormlord as my conversion body. Getting to work on finish painting my Necron force in time for TempleCon.  Was going to originally take my Nurgle force but with some of the recent FAQs (Nerf on Warptime and Nerf on Abbadon) just no really compelled too.  So after talking with some of my IFL members at Brittany's last Tuesday I was inspired to take the Necrons for their first Tournament engagement.  Not looking to take top table seeing as well A. I'm not that good, and B. I am still ironing out the "quirks" of Necrons.

Thanks to the recent FAQ release it at least clears up alot of the concerns I had over how things worked in the army dex:

There are still some FAQ questions hanging out there but I will just address them with the TO at or before the tournament.  Biggest one comes to mind is "Can I Protocol from Jaws of the World wolf?"  My brother adamantly says "Hell no.  Taken from play...get off my board".  I argue the point.

None the less TempleCon...or as I have deemed it Temple-Crons, is around the corner and I have 2+ weeks to get 2K paint.  Uhhhhhh...No problem

Protect your internet. Vote "NO" on SOPA and PIPA 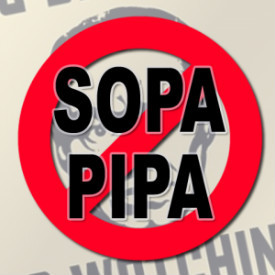 Do you enjoy Blogging? Facebook? Youtube? Google? anything on the Internet?  On Jan 24th our government is going to attempt to pass the SOPA and PIPA Bill unless we act now.  If passed these sites could be taken down with no legislation to appeal.  Neither SOPA nor PIPA bare any burden of proof for violations of IP infringement, which means anyone anywhere can write the Attorney General making a claim of IP infringement and that site will be blocked on US ISP, with little to no hope of ever returning.  The government already tries to control our lives as it is.  Don't let them take control of our Internet as well.  Please I beg you write your Sen and House Reps and tell them to vote "no" on both SOPA (H.R.3261) and PIPA (S. 968) today.

Want to know more?  There is a great site on it here.  http://americancensorship.org/
Which by the way if SOPA and PIPA are passed won't be able to be accessed cause the government would have blocked it.  If you think SOPA and PIPA are going to stay within the confines of only protecting it's intended design (Entertainment IP) you will be sadly mistaken.  The government "will" abuse this ruling to their own gain, the less we are informed the more power they have.
Posted by Tao No comments:

Necron FAQs are in

Loaded last night the Necron FAQs (and several other codexs) are now out.  Here is the link to all the FAQs (http://www.games-workshop.com/gws/content/article.jsp?categoryId=1000018&pIndex=1&aId=3400019&multiPageMode=true&start=2) but allow me to highlight some of the Necron changes that I found worth mentioning (FYI - this is not a total list just the ones I know have come into question alot)

Took the 2K list to Iron Fist League (IFL) game night at Brittany's in Woodbridge, VA (Yes, you can game and eat and drink bear, how cool is that) and got a match up with a good friend Steve and his Inquisition style Grey Knights List.
His list:
He may not be a tournament player but I can tell you he has used this list many a times to put a monkey stomp on people.  Things I used from my list to great effect  The game was Spearhead with 4 Objective counters.  We placed 3 in a line across the middle of the table

In the end it was a well fought match but the Imperium lost their grip on that world to the roaming machinations of the C'tan.

Rules Questions that came up:

Up next is a local friendly tournament down at the very awesome "The Game Vault" store.

Tournament is at the store on Jan 21,2012 from 10:30am - 6:00pm in Fredericksburg, VA.  It's a friendly tournament because there has been a recent flux of 40K beginners in the area.  I don't think their will be any prize support but as a standing Iron Fist League member I am going to head down there to help out.  Get a couple games in, but play from a friendly/teaching stand point, not a I am going to the top like you might expect at other tournaments.  Not sure what I am going to take.  1500 is a completely different game then 2K with different threats and less points to cover the known issues of this dex.  Will post what I come up with as soon as I have figured it out, any suggestions would be greatly appreciated.
Posted by Tao No comments:

So I play my armies a bit aggressive.  Not so much aggressive in the sense of spending two rounds to get in CC and trying to stay there all game like some assault armies, but more aggressive in the sense of not sitting back and shooting till you are forced to assault.  I never like games where my opponent is dictating the battle to me.  I am a firm believer that once you are reacting to your opponent you have lost.  Yes there is a level of reaction where an opponent has taken our a unit you wanted or is in your deployment zone but as a rule you should have a plan to win when you come to the table and commit to that plan.  If you start back peddling you will never catch back up to said plan and your sunk.

That being said I wanted to run my necrons with a bit more of a list that allows me to start dictating moves.  I'm not a huge fan of some of these "Gauss-n-pray" lists out there.  So after some play testing my 2K list is currently sitting as follows: 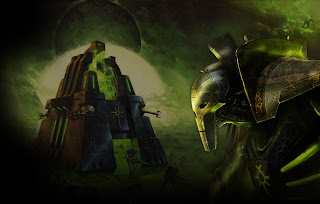 So everyone is saying that Necrons are about unit synergy, and from my play testing experience I can confirm this is absolutely 100% true. Below are several combos I have used and/or heard of, if they help even one Necron Player out there then this post has been a success.

Wraith Wall: Have 5-6 Wraiths and on deployment you can give cover to your more fragile units, protecting you some from Alpha striking. Put them in front of your scarabs and you give them a 3+ cover save. Since the models are so tall, put them in front of your Command barges to give them the 4+ cover (Command barges are most vulnerable in the first turn without this as shots hitting them before they move cannot be cover saved off, wraith wall counters this weakness). Similar vein of thought put spider's behind since yes they are Monstrous but they have a low profile so Wraith give them a 4+ cover since they have no invul.

So what units aid the Wraiths? Lance-Tek's w/ Warriors (or Gauss Immortals). Rokkit or Glance-spam a vehicle so that the wraiths get more Str 6 Rending attacks on rear armor in CC. All you need is a Immobile to make a Wraith's day.

I return from the dead

Wow.  It's amazing how time flies while you are trying keep things going during the holidays.  None the less sorry for the lack of posting.  I have been working to finish out the 2K Blood Angels commission.  Nearing the last 10 figures, and then...no more red for a very long time.

On a personal painting thread I have finally settled on my Necrons color scheme (non-red).  I was tempted to go with a metallic look but felt it was a bit to..."normal", so I went with a ceramic (aka color toned) robot.  First up we have one of my Pyrrhian Eternals, the upgraded versions of Immortals when you take Anrakyr the Traveller.  I struggled with how to distinguish normal Immortals from Pyrrhian Eternals, so I decided on some good old kit-bash mix and match.

Basic Immortal body and weapon with a head swap from the Triarch Praetorian and the added elements of the "lion cloth" and tail from the Lychguard.  This gave me a bit more sense that these Immortals were a step up from the norm.  When they were going through their biotransference﻿ process Anrakyr had them selected to have "the better model".

Next up is my scratch built Cryptek.  What can I say.  I really don't like the Cryptek model GW created.  Even more so that it's a mono pose and limited gear display (which sucks for any form of WYSIWYG).  This is going to be my Harbinger of Destruction with Lance and Solar Pulse (the little orb on top of it's spine-back).

Body and legs are part of the free Overlord bits from the Barge.  Hand and staff is from the Praetorian set and head is from Deathmarks (I really really like this head).  And last but not least the ball for the Solar Pulse is one of the orbs of a Deathmark back snipped and glued on top.

My list has about 20+ play tests to it and I can shed this one little light.  These are not Space Marines.  If you ever think to play them like Space Marines you will be sorely disappointed.


Posted by Tao No comments: